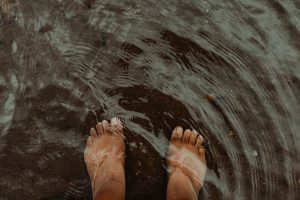 When one of my boys was baptised six years ago, one of his sponsors was a dear friend, who was delighted to be asked to be a part of his faith journey.

But then I took a call from my friend a week before the baptism, to tell me she couldn’t be the sponsor. She had told her mother about the baptism, and her mother was horrified, saying you can’t be a godparent in a real church! Bear in mind, she attended a Lutheran church which is most certainly a real church, but you’ll understand this exclamation shortly.

Her mother went on to tell the story her baptism – my friend was born in Northern Ireland, to a protestant and a catholic parent. Soon after she was born, her Catholic grandmother got the Holy Water out and baptised her in the name of the Father, Son and Holy Spirit, to ensure she was Catholic and therefore, “properly” baptised. We accepted the emergency baptism, knowing there was another sponsor with a documented baptism in case he ever wants to be a priest!

It’s a lovely story for us, but these heightened emotions, and the seriousness with which we addressed them, speaks to a deeper truth in Baptism.

The story of Jesus’s baptism immediately follows Luke’s account of The Baptist’s instructions to the “brood of vipers” who had come to be baptised. You will remember that this extraordinary and uncompromising man gave a most measured and achievable instructions:

“Whoever has two coats must share with anyone who has none; and whoever has food must do likewise

[Tax collectors] “Collect no more than the amount prescribed for you.” [Soldiers] “Do not extort money from anyone by threats or false accusation, and be satisfied with your wages.”

People came to John to be baptised, hearts full of expectation, and on hearing the hope in The Baptist’s message of repentance, they wondered if this might be the one to save them. A great man. The Messiah.

But The Baptist promised something very different. Their salvation was not going to be through him. Another is coming, and that one will baptise them in fire and spirit, gather them together, with a judgement of fire. In Jesus, the baptism to come will hold together the Holy Spirit, the gathering of God’s people, and judgement. We will see that the response required is repentance and response to the Spirit, in community.

While Baptism isn’t a focus in the Gospel accounts, there are references to people being baptised as part of Jesus’s ministry. The rite continued with the disciples and apostles after the death and resurrection of Christ, and it was then that we hear Baptism accompanied by an outpouring of the Spirit on the people. Today’s reading from Acts, Luke’s account of the ministry that followed Jesus’s resurrection, was of the Spirit poured out in Samaria as Peter and John baptised the people. This powerful story is purposefully nestled amongst the story of a man called Simon. Simon had been considered great in Samaria, he was called an embodiment of the gift of God, because he had practiced impressive magic. But when he heard about Jesus, he believed, and was baptised – so far, so good. When Peter and John arrived, and Simon witnessed the outpouring of the Holy Spirit, he showed his lack of understanding of what was happening by offering Peter and John money to be given their gift. We can imagine his hope of restoration of the power, the status, and the authority he had once enjoyed. The Baptist would have been proud of Peter’s response:

Peter said to him, “May your silver perish with you, because you thought you could obtain God’s gift with money! 21 You have no part or share in this, for your heart is not right before God. 22 Repent therefore of this wickedness of yours…

Repent, he was told, turn back. With the tax collectors and soldiers, Simon was instructed in no uncertain terms to put God and his neighbours first, and to give up his heart’s self-centred intent to use God for power, recognition, and money, because God’s kingdom doesn’t work in that economy.

inward and invisible grace. Baptism belongs to the Father, the Son, and the Holy Spirit. In Baptism, there’s enough water in the font to drown, because we die to the world’s selfish and divisive ways and turn to the Father’s way. The water is cleansing and refreshing. When we emerge, we are anointed and named, recognised by the church, and known and loved by Christ. Baptism marks us forever as part of Christ’s holy church, set aside for God’s purposes, with the Holy Spirit amongst us. No matter what the world might think, the extent or lack thereof of our power, ability, status, worldly authority, or wealth, in the church, we are gathered together, to the Father, by Christ, in the power of the Holy Spirit. It is a work of God’s grace.

Luke makes clear both in the Gospel and Acts readings that this gift of the spirit comes to those who turn to God, so they might continue in God’s way, and that the spirit is a gift given to the community, as an answer to prayer.

Now when all the people were baptized, and when Jesus also had been baptized and was praying, the heaven was opened, and the Holy Spirit descended upon him in bodily form like a dove.

The Baptism of Jesus, the appearance of the Holy Spirit, and God’s sign of approval are included in every Gospel account. Luke’s account of Jesus’s baptism differs from the other three gospel accounts in one important way – the Spirit of the Lord descends on Jesus not as Jesus emerges from the water, but as he was praying, after the baptism of all the people and after Jesus’s own baptism. There in community, as Jesus was praying, the Holy Spirit was manifest – God tangibly present, in bodily form, just like Jesus himself. This is an important clue to us for one of Luke’s key messages in the Gospel text, and this year, we’ll hear Luke mention Jesus praying more than any other Gospel writer.

Luke continues the theme of prayer into Acts, and we hear today that the Holy Spirit’s outpouring in Samaria also occurred in community, and followed prayer:

Peter and John went down and prayed for them that they might receive the Holy Spirit.

Baptism brings us into the body of Christ, so that with the guidance and power of the Holy Spirit, we can participate in Jesus’s continuing work here, right now. Your baptism is part of a succession from these very baptisms we heard about today. Each person that baptises was themselves baptised, in an exponential outward flow of grace from these first events in the early church. And in one way or another, each person that handed down the teaching and traditions of the church to their family, their friends, and their neighbours answered the same questions asked at Anglican baptisms, and continued to answer them.

The Baptist pointed us to the one that would come, and in Jesus, we confidently accept the gift that is membership of his church, and the gift of the Holy Spirit amongst us.

The Baptist called us to repent, to return to God, foreshadowing Jesus’s own call, ministry and teaching.

The Baptist told the crowds what it meant to repent and to turn to God – it is to reject selfish living, all that is false and unjust.

After describing Jesus’s baptism, Luke goes on to describe Jesus being tempted by Satan in the wilderness – temptations that echoed the selfishness and desire for power from which The Baptist called the people to repent.

While these are promises are important for us each individually, and make for good and healthy lives, take a second to think about how different would our world be, if every person could live into these promises to their fullness as a community? There is so much hope in these promises.

My son was baptised because he had heard the Gospel proclaimed in his family and by the dear people of the church we attended. They knew him by name, and taught him, and then with joy he accepted the invitation to be baptised amongst them. He then undertook to stay on the path that The Baptist prepared, following Christ, and my friend and I solemnly promised to help and teach him. As he is nurtured and grows here at St Mark’s, he too will share this message, and help others find their way, as we work together for Christ.

For those of you who were baptised, I wonder what your own journey after Baptism was. Perhaps you are a cradle Anglican, that moved seamlessly from Baptism to children’s ministry, confirmation, and became an adult believer? Perhaps some of you went away from the church, maybe even from belief for a time? Others may have been baptised as you heard and responded to the good news much later in life, and some of us might just not know where the journey is going or where we are. Perhaps you aren’t yet baptised, but you’re keen to know more. For each type of journey, the church is here, to welcome new believers, and then help them on the way. This is good for us. Belonging is good for us. This is good for our church community.

But the promises made at Baptism aren’t just for us as individuals, or for just the church, but they are for the good of the world around us. There are five recognised Marks of Mission in the Anglican Church that show when we are living into God’s mission as a church of the Baptised.

The first two relate to hearing about God and the promise of life in Christ, and our response in turning towards God, helping others to do the same.

The next three describe the impact that should have on our lives, and the lives of our community. If we love God first, and then love our neighbours as ourselves, our community should become known as one that recognises inequity and suffering of God’s people and creation, and responds with God’s love:

Epiphany, by definition, is the moment when something indescribable is shown clearly, made tangible, and is embodied. God the son was embodied in the infant Jesus, the Holy Spirit in the bodily dove that descended upon him, and God the Father in the voice that spoke love.

Epiphany then is the right time to ask – how might the Holy Spirit be leading St Mark’s to be a physical and undeniable reality of God in the world around us? Luke tells us clearly where we need to start if we want to see the Spirit working: we turn back to God, and pray.

As we reflected on Stewardship last year, I asked our community to spend the month in prayer, as we considered where St Mark’s might be lead, and what we each might contribute. This year, that work continues. We will complete together the National Church Life Survey on the Seventh Sunday in Epiphany, and our AGM is the final Sunday of Epiphany, before Transfiguration. In March, we will spend a day together, in a visioning exercise, to discern God’s call for our community. What better time than Epiphany to gather again in prayer, for the Spirit to show us as a community where God is leading, and to reveal what gifts we as individuals might be called to contribute along the way.

In the name of Christ,