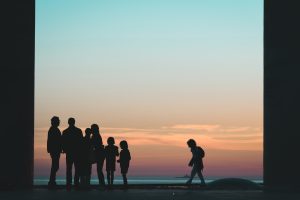 A sermon offered by The Rev’d Ann Edwards

This work is licensed under a Creative Commons Attribution-NoDerivatives 4.0 International License.

Our reading from Ephesians today has too frequently been taken out of context. That is a deathly shame, because the writer, who identifies as Paul at the beginning of the letter, crafts a compelling argument for a healthy Christian community within an oppressive society – and it is an argument that speaks truth into so many situations today.

Leading up to our reading in Ephesians, the writer exhorts the readers and listeners to avoid empty, vulgar and obscene conversation, but to instead look for conversations that are fruitful, truthful, and right. The writer is beginning the argument for a counter culture, but this call to beware of the evil around us is too frequently not linked with the text that follows – one that speaks to relationships in marriage, and then goes on to unpack a range of relationships in which a power differential exists.

How often have you heard verses 22 to 24 taken out of context, cited on its own?

Whoa – wait. Wives are to follow their husbands as they would the Lord? My brother thought that was a terrific joke, when he gave my husband those verses.

We can’t cherry pick the Bible, so let’s look at what the writer is saying, giving him the respect of following his whole argument.

21 Be subject to one another out of reverence for Christ.

Terrible abuse has occurred by misuse of this text – women experiencing violence at the hands of their husbands have been advised to stay and submit and endure. Because the sometimes well-meaning and sometimes expedient advice has come without due respect for that leading statement – the scene setter, the context clearly provided but the writer – submit to one another; be subject to one another –  husbands to wives, and wives to husbands – out of reverence for Christ.

And this folly is so much the worse, for the neglect of the text that follows, because the writer of Ephesians conducts a very careful and important analysis of the power structures of the everyday lives of his readers. He unpacks the interplay of power within the home and presents a thoughtful balance of the roles of those in authority and those they are responsible for, starting with the most important concept: people should submit to one another out of reverence for Christ. Not just those without power, but also those in authority.

In the time, when society’s structure ensured a woman was dependent upon and at the mercy of her husband, in Christ’s sub-community, the husband would love her as he does his own body – he was to nourish and protect her. He would love her and in return she would respect him. And does love come without respect? Is love less than respect? Does love hurt, harm or diminish? Remember – we’re talking Christ’s love here, so let’s not misunderstand the writer’s intent. Our relationships in our families are conducted in mutuality and out of reverence for Christ.

We follow the lectionary at St Mark’s for our readings – which is wonderful, because it ensures we all get a comprehensive coverage of the Old and New Testament, the Psalms and the Gospels. But the Australian Anglican community has largely fallen out of the practice of morning and evening prayer – and as a result, some parts of the Bible can be missed if we rely on Sundays.

A part that we don’t read on Sunday in this cycle in the Lectionary is the section that immediately follows this text. Let’s take the opportunity now to unpack Chapter 6, verses 1 to 9, to understand the argument the writer is building up to. (And because personally, as a parent, I’m a bit disappointed we skip over Chapter 6, verse 1!).

Children, obey your parents in the Lord,  for this is right.  “Honour your father and mother”—this is the first commandment with a promise: “so that it may be well with you and you may live long on the earth.”

Whoo hoo, right? Wouldn’t life be a piece of cake for parents then…. But the writer of Ephesians is building an argument, and has a pair for this exhortation, just as he did for wives and husbands.

And, fathers, do not provoke your children to anger, but bring them up in the discipline and instruction of the Lord.

Fathers at the time held the ultimate authority in the home – that was the way society was structured. They didn’t need to consider what children felt about their decisions or actions, but in Christ’s family, this privilege and right becomes instead responsibility, and Fathers are called to restraint and to think first of the child.

The society at that time had an even greater imbalance of power in people’s households.

Slaves, obey your earthly masters with fear and trembling, in singleness of heart, as you obey Christ; not only while being watched, and in order to please them, but as slaves of Christ, doing the will of God from the heart. Render service with enthusiasm, as to the Lord and not to men and women, knowing that whatever good we do, we will receive the same again from the Lord, whether we are slaves or free.

In the wrong hands, imagine the abuse this could justify. It may well be better to say – remember the abuse this text has justified. No wonder we miss this text on Sundays, but we shouldn’t avoid the difficult parts of Scripture.

Because following Christ – who flipped every possible assumption we had about power over others – the writer of Ephesians says:

masters, do the same to them. Stop threatening them,  for you know that both of you have the same Master in heaven, and with him there is no partiality.

This is absolutely astonishing. Slaves were owned. But here, the writer of Ephesians instructs slave owners to treat their slaves as equals under God, knowing in him there is no partiality. Our God in whom there is no favoritism or bias, no preference for one over another.

So yes, wives might be asked to submit, if we’re reading the NIV text, because that was the power structure and organization of that time, AND only in the sense of submitting to a man that loved and cherished them, who understood that the two were effectively united and were responsible for taking care of each other with the same tenderness and love they afforded themselves.

Children should obey their parents as well and again the author has an AND the parents, the authority, should not provoke those in their care to anger, but instead should lead them in God’s way.

And addressing a primary workforce of the time, slaves were told to obey, sincerely and wholeheartedly AND Masters were to treat their slaves in the same way, knowing they were equal under God. What a revolutionary message – don’t abuse your power to mistreat your workers, see them as God does, and treat them knowing you’re both subject to a God in whom there is no partiality.

The author acknowledged that this society had an organization, there were roles of authority and responsibility, and roles of work and support AND people in those roles were to live them as would Christ, with love, reverence and respect, knowing that all people were subject to the God in whom there is no partiality.

This is an elegant and persuasive argument in resistance to oppressive power structures. In a world that allowed (and continues to allow) abuse and oppression, the writer of Ephesians calls God’s people to more. It is truly counter cultural.

The idea that Christianity is a counterculture has become too familiar, and maybe too distant in our society where Christianity has for a very long time been the norm and a holder of power. Maybe it’s time to take a good, long, hard look at where power is wielded in our families and communities today, and what we might do to be subject to one another, especially when the power rests with us.

Because in our families today, where there is self-interest instead of respect and mutuality, the consequence is conflict, and at its extreme domestic violence, elder abuse, and child abuse. In the workplace when the self is put first, the structures of authority fail and we have bullying, shirking, undermining, system failure, economic abuse, and oppression. When we live as God would have it, and recognize that all of us are equally valuable in God’s eyes, we take care of one another and community and systems work. When ego wins, we splinter.

We need to start local, in our own relationships, because we are still in a world that is organized in a way that is too frequently unjust, unfair, and oppressive. How do we live as children of God, showing no partiality, in a world that tells us to get what we can, to succeed is to have more than our neighbour, to put ourselves first? We live as a counterculture, and sow God’s truth and gospel in our actions in our own relationships.

Because how often do we listen to the news and despair? When it seems like it’s all just too much? And how often do we see even Christian communities splintering and fighting in God’s Holy name. We are not called into relationships of domination, defeat and winning. Let’s not buy into this ugly game of advantage, that can only lead us away from God. The writer of Ephesians tells us that the systems may be broken, but we don’t have to participate in the brokenness. We can be as Christ to one another.

So don’t feel despondent when you read the news. You’re not powerless, you’re a part of the resistance, a resistance that is eroding self-worship and oppression one prayerful loving act and one truthful and joy-filled word at a time. We start in our families, with our own relationships, and pay attention to being subject to one another. We practice the art of listening carefully, and taking on what we’re told. We repeat what we’ve understood to our loved one, friend or colleague, so they know we have heard them. Because each time we listen to the truth, each time we love and refuse to participate in the selfish, we show the better way. Selfishness gained power one human heart at a time, and each action of prayerful love and respect is yet another strike in God’s mighty riposte. Healthy relationships in our communities are the necessary foundation so that we can reach outwards with Jesus’s love to the world.

In the name of our God, the Almighty One, in whom there is no partiality.